What is EIFS / ETICS?

An Exterior Insulation Finishing System (EIFS), also known as EWI (Exterior Wall Insulation Systems) or External Thermal Insulation Composite Systems (ETICS) is a type of cladding system that provides exterior walls with an insulated finished surface and waterproofing in an integrated composite material system. Put another way, an Exterior Insulation Finishing System / External Thermal Insulation Composite Systems can be defined as an ideal energy efficient thermal wrapping or facade insulation applied to the exterior surfaces of a building which is then finished with a long-life, decorative and protective wall coating that can be installed on any type of construction.

In the construction industry, there are a number of versions of EIFS / ETICS. The most basic and common EIFS / ETICS is called a barrier EIFS, also known as traditional or conventional EIFS / ETICS, which is applied to a solid wall (brickwork, blockwork, pre-cast panels and the like). Another type is called EIFS / ETICS with drainage, which is a barrier EIFS / ETICS to which a water drainage capability has been added. This is done mainly for wood structures. 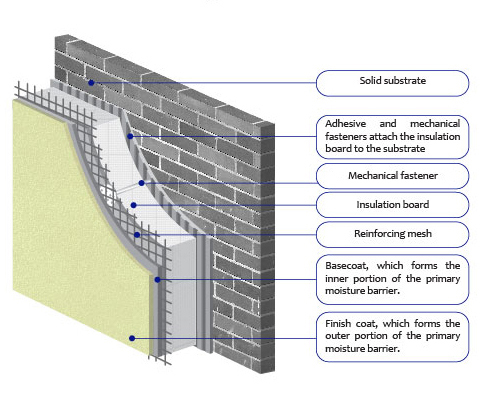 Sectional view of typical EIFS / ETICS on a wood substrate

What is the difference between Stucco and EIFS / ETICS?

To function properly, EIFS / ETICS needs to be architecturally designed and installed as a system by trained applicators.

EIFS / ETICS Components
While giving the appearance of stucco (or conventional rendered plaster), EIFS / ETICS is actually a multi-layered wall system that consists of the following components:

The History of Terraco EIFS / ETICS

Terraco first launched its EIFS / ETICS systems in Turkey and Korea in the 1980s, which was then expanded to Russia, China and the Middle East during the 1990s. Today Terraco offers 3 different EIFS /ETICS systems – EIFS Alpha, EIFS Polar and EIFS Perma – the difference being the type of insulation materials used in each system. Terraco also offers a system for insulated concrete form – ICF Zenith.

1950s
Two significant developments took place during 1952 that led to the development of EIFS / ETICS in Europe. The first patent was granted for expanded polystyrene (EPS) insulation board and the first synthetic plaster, an organic plaster using water based binders, was developed. The use of EPS and synthetic resin materials together began in the late 1950s.

1960s
EIFS / ETICS was marketed in Europe as it answered a need in the European construction market for a material that could insulate older masonry structures and enhance their appearance. European EIFS (ETICS) tended to have a thicker and coarser finish, to provide for better waterproofing. The systems used in Europe also featured the use of less Portland cement and a higher resin content in the base coat, giving the system more flexibility and water resistance.

The technology for EIFS / ETICS was transferred to the United States in the late 1960s where the use of EIFS / ETICS on stud-and-sheathing framing (instead of over solid walls) was developed.

1970s
During the oil crisis of the early and mid-1970s, EIFS in the United States became popular with energy-conscientious builders and buyers, who sometimes saw energy bills halved. In the United States, EIFS began by being used almost exclusively in the commercial building market, and was only gradually adopted for use in homes.

1990s
By 1995 nearly 18 million m² of EIFS were being installed annually on exterior walls in North America, predominantly on wood structures.

By the mid 1990’s the industry suffered a setback in the United States when a number of EIFS clad homes were discovered with moisture damage caused by water leakage, which was a nationwide issue. The water ingress was attributed to poor construction detailing and installation practices. Class action lawsuits were filed and settled by manufacturers in the United States.

By the turn of the century, in Europe, the decisions by numerous governments to introduce an energy rating system on buildings supported by government aided funding / rebates has seen as rapid growth of EIFS. While the use of EIFS over stud-and-sheathing framing (instead of over solid walls) is a technique still used all over North America, certain parts of Europe and the Pacific Rim.

The EIFS / ETICS industry now faces the challenge of formulating fire-resistant Exterior Insulation Finishing Systems, through the use of incorporating fire retardant materials and / or fire breaks in the system, something Terraco has been focussing on for quite some time.